The Wall Market section of FF7R is the most perfect thing I've ever seen
October 22, 2020 Joshua Hawxwell
As someone who enjoys looking at old maps, this history of Broadmarsh is top notch https://storymaps.arcgis.com/stories/21c59c2e9c52410b9278230ea7828acc
October 20, 2020 Joshua Hawxwell
I do love getting the item delivered email from Amazon when it hasn't arrived. Just don't send the email, I'll know when I've got the delivery
October 01, 2020 Joshua Hawxwell

I enjoy using Fraidycat to read some feeds, in addition to my "river of news". It is a really nice format. But I did really want to use it from multiple devices without importing/exporting every time.

So I have made something that replicates it, kind of, in a hosted app based on a lot of the feed reading code I already had written for riviera. I've called the new thing arboretum, and have a (private) instance running along nicely.

I don't know if I'll keep it private forever, but at least for now it gives it a different feel to my public feed reader.

I opened up the code for relme-auth as I noticed Twitter wasn't showing as an option, looks like they've removed rel=me from the homepage links in the last few weeks which is pretty annoying...

It looks like there is a space at the start of the rel tag, maybe it was only an accidental deletion. Also I miss the days when classes meant something.
June 23, 2020 Joshua Hawxwell
I opened up the code for relme-auth as I noticed Twitter wasn't showing as an option, looks like they've removed rel=me from the homepage links in the last few weeks which is pretty annoying...
June 23, 2020 Joshua Hawxwell 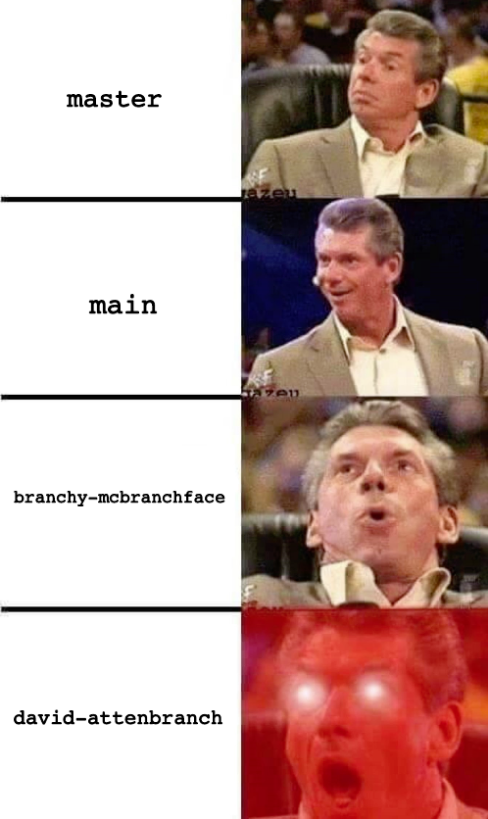 5 years later, a new way to test in Go

5 years ago I forked https://github.com/stretchr/testify, because I wanted to "fix" the ordering of arguments to some of the functions. It isn't something that really matters, as I've lived with it for 5 years and it is one of the more popular assertion packages.

But last week I started thinking about it again, and decided that maybe I should do something about:

As I'd already published the package, by virtue of having my fork on GitHub, I didn't want to change the existing API. I doubt anyone else relied on it, and with modules it shouldn't affect me, but I am trying to do things at least semi-properly.

So I added a new API. The new style is impossible to get wrong. The only cost is that you have to get the assertion function by wrapping the *testing.T first (you don't have to, but it would be ugly not to).

I haven't changed the naming so some of them may read a bit weird.

When I originally forked the repo I did do one thing: I moved the assert package to be the root. I never really liked the style of test where the first failing assertion quits the test. It just means you have to run a test over and over to find all of the problems. But sometimes it is useful if one assertion means the others are pointless; for instance, if a list is empty you don't need to assert properties on the first element.

With the new API I have been able to provide the ability to do both. Using the .Must property on the wrapped assertion function gives access to the same API but with the methods will terminate the current test.

Admittedly the naming does get even more off with the word "Must" in the middle, but this is Go not English…

I will never understand why Firefox's default tabbing behaviour is set to "show me an alt-tab thing with my tabs in an order I don't expect"
May 02, 2020 Joshua Hawxwell

I feel like I'm missing something. Say I have a URL for someone's Flickr profile (e.g. https://www.flickr.com/people/hawx-/), and I want to retrieve the info for that user using the API, what method should I call?

flickr.people.getInfo will get the data I want, but it needs the NSID of the person. Now you can have URLs like https://www.flickr.com/people/75695140@N04, which is my profile again, but it is much nicer to refer to them using the "nice URL".

I can get the NSID using flickr.people.findByUsername, but this wants the username which may not be the same as the thing in the URL. In my case I have "hawx-" in the URL, but my username is "hawx~".

When I started building this site I wanted to bring back the feel of my old Tumblr. Not that I really posted that much there, or here, but the mix of content was nice and something I missed on /weblog.

I liked the colour palette which I had found on colourlovers.com however many years ago. If I pick colours myself it always ends up being a standard white/black/accent website, which is 98% of the web and therefore boring. I also loved the way Signika Negative looked, so wanted to bring that too. 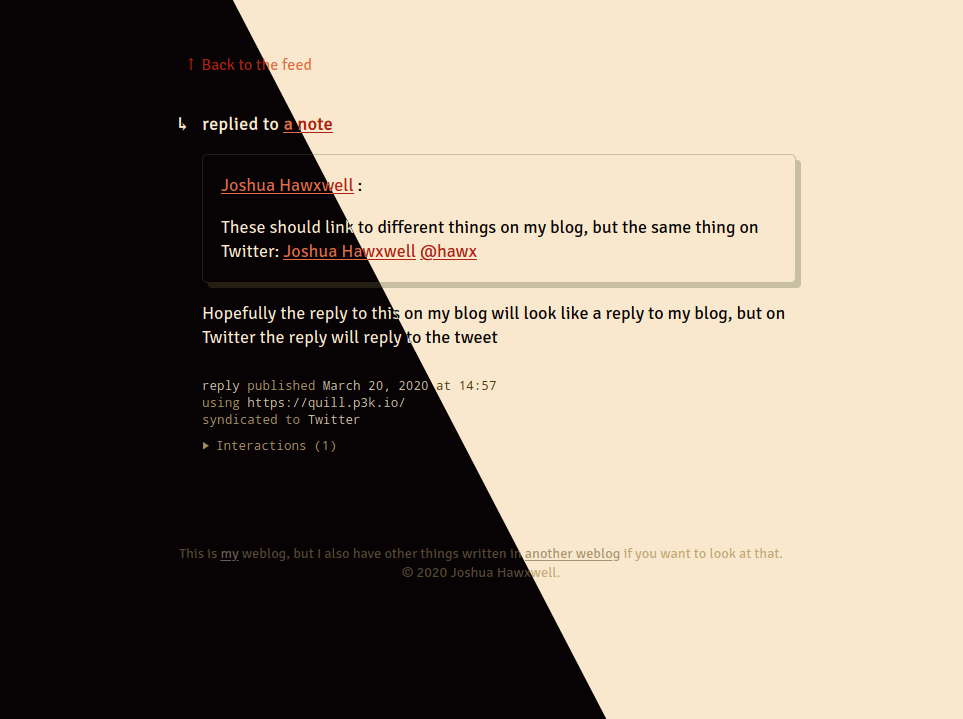 But it is 2020 and everyone is adding dark modes, so what do you do when your site is already dark?